Not to be confused with 313

Three One Third or The 313 crew or simply The 313 is the main group of the film, Three One Third is a group of 5 people from Detroit, which are listed as follows: B-Rabbit, Future, Cheddar Bob, Sol George and Dj Iz.

Because the film is set in Detroit, the 313 area code is mentioned several times in the 2002 film 8 Mile, B–Rabbit, and his friends refer to their group as "three one third," a reference on the area code.[1]

Three One Third appeared in the first rap battle between B-Rabbit and Lil' Tic, one of the members of the crew, Cheddar Bob encourages him to freestyle, but he chokes out of the battle and leaves with his crew, Three One Third are seen again driving in Jimmy's car after he finished repairing his car, Sol George brings a paintball gun and lets the crew to shoot and scare the pedestrians away, but Jimmy accidentally shoots a police car, hitting the window and its door, After that, Jimmy's car have run out of gas, but they've manage to escape away afterward, Dj Iz says that there is an abondoned house where the girl was raped there and it must be burned down because it might happened again.

Jimmy then drives with the crew to the parking lot where they saw a freestyle there, two members, Future and B-Rabbit, joins in and performs a freestyle while Dj Iz beatboxes, Sol George soon interrupts B-Rabbit's freestyle by singing "Doe B - 10 Freaky Girls" along with the members of the crew, the crew's rivals, Free World drives up to them and Lyckety-Splyt taunts their crew and when he makes fun of B-Rabbit for his "choke act", B-Rabbit angrily pulls his legs and hit his head on the car he was on and the fight ensues, until Wink breaks it up, the crew then walks in to the Chin Tiki nightclub after the fight.

Like what Dj Iz said earlier, the crew along with the other people burns the entire house down and celebrates, the crew are seen again after B-Rabbit finished working in New Detroit Stamping, B-Rabbit drives up with them to fight Tha Free World, until Cheddar Bob pulls out a gun, and is ordered to put it away, Bob then understands and tucks it under his pants, but accidentally shoots himself in the upper leg, and the crew drives him to the hospital and slowly recovered, Cheddar Bob now wanted to be called "MC Bob", After taking Cheddar Bob to the hospital, Wink and Future starts fighting until B-Rabbit breaks it up, leaves on his car and wen't home, while his mother is watching the film "Imitation of Life" (1959).[2]

B-Rabbit is on Wink's basement, Wink comes to him and said that Future have signed him to another battle, Wink then brings Future, which he said that it was for Papa Doc. B-Rabbit angrily responds to him and push him away, Future then leaves the basement, the crew is seen at The Shelter, with Sol George and his brother Dj Iz in the background, and B-Rabbit practicing his freestyle in front of Cheddar Bob, but gets mocked by Tha Free World, Future then comes in, and brings Jimmy to the bathroom, Jimmy said that he felt sorry and apologizes Future for what he did, Future then encourages him, B-Rabbit then comes in for the challenge, and beats all three rappers of Tha Free World, Tha Free World then leaves, with all of the crowd and his crew chanting: "Fuck Free World! 313" 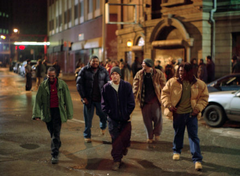 "Three One Third" members leaving out of The Shelter. 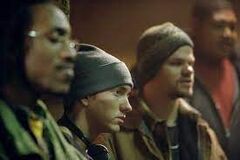 A picture taken from "Behind the Scene" 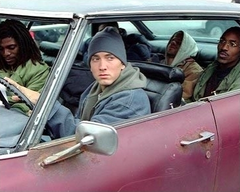 "Three One Third" at Jimmy's car. 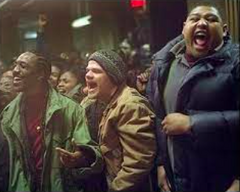 Three members of the crew: (left to right) Dj Iz, Cheddar Bob and Sol George at The Shelter during the final battle .

Community content is available under CC-BY-SA unless otherwise noted.
Advertisement